Of Overdue Massages and Unlimited Emails

After 2 marathons and a half, I finally had that much needed foot massage for all those hard-earned miles. Bloggers were invited to a night of R&R at the Blue Water Day Spa in Greenhills (Thank you, Coy Caballes!) for the launching of Globe Tattoo UnliMAIL- unlimited emails on your mobile phones, wherever you are and whenever you want!
Jeez, had I known about this, I probably would’ve gotten those massages a long, long time ago. Work had gotten pretty hectic that it’s been a luxury just to be able to squeeze in a massage. And with the free time that I had, I went out running or stayed in sleeping instead (My laptop might get confiscated if I brought it in a spa). So, to be able to check your emails on your phone (discreetly, if I may add) in a never-ending meeting, in a car, in a traffic jam, and even in the loo would really be a timesaver. You don’t even need a Blackberry or an iPhone. And no need for an internet connection either (Although you might need a better excuse on why you didn’t reply to that email on speed dating from a well-meaning aunt!).
. 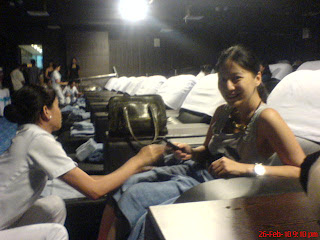 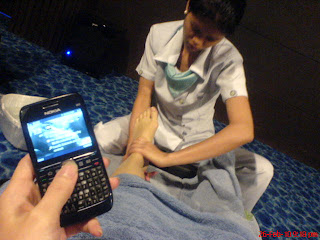 {Downloading the Globe UnliMAIL apps- then I realized my phone wasn't compatible yet. Boo.} 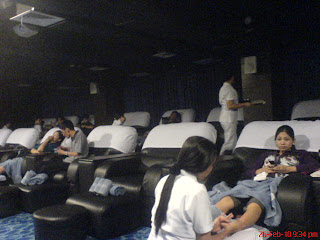 {Everyone was emailing on their phones.} 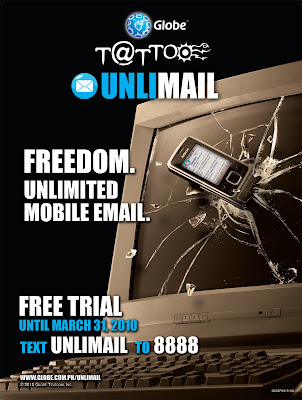 It’s easy to register!
1. Text UNLIMAIL to 8888.
2. You’ll receive a text with a WAP link.
3. Click the link to get the application for free.
4. Choose myGlobe Connect APN as your connection setting, and the application will automatically download onto your phone.
5. Click on the UNLIMAIL application to start sending and receiving emails (Gmail, Yahoo!, Hotmail, etc.).
.
UNLIMAIL is available to all Globe Postpaid, Globe Prepaid, Globe Tattoo Mobile subscribers.
.
For help in configuring and using Globe Tattoo UNLIMAIL, you may call Globe’s 24 hr customer service hotline at 730-1000 or toll-free at 222. You can also visit the website for the UNLIMAIL user guide at http://www.globe.com.ph/unlimail.
4 comments:

3G Run: The One That's Not Packed Like a Tuna

Last Sunday, while practically all the runners were packed like, erm, sardines at The Fort during the Century Tuna Superbods Run (this runner included), a bunch of renegade runners were in Ayala Ave. enjoying the calm of a Sunday CBD run.

The 3G Run
We were all supposed to run in the Superbods Run, but since my friends weren't able to get 10K race kits, they decided to just make their own run. And since our dear friend Gabby (my running inaanak) will be leaving us and moving continents the very next day, they decided to do one last run (I already had my 21K race kit, so I just joined them for the most important part- Breakfast!).

The 3G (Good luck, Gabby Gregory) Run took them to the newly opened Ayala Triangle Park, Ayala Avenue, Salcedo, Legaspi, and going through the underpasses (ala Urbanathlon) to name a few. I've always enjoyed the Makati CBD on a deserted weekend, so this seemed like an interesting route. Too bad I missed running with them, this would have been a good preview run for the upcoming Globe Run for Home 2010.

After the run, breakfast at the Sunday Market was, of course, in order. =) 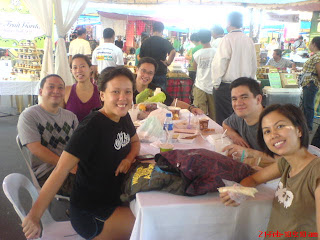 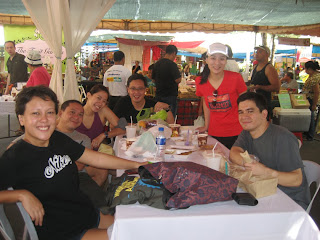 {Habol runner in red. Double-booked with the Century Tuna Run.} 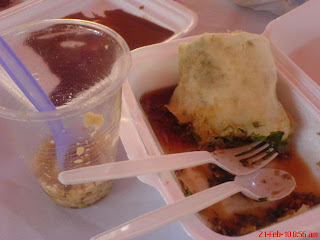 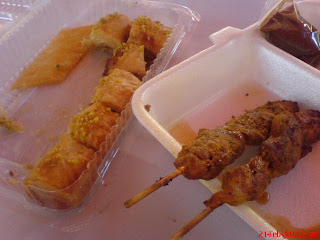 {Baklava and Chicken Satay (which I skipped)} 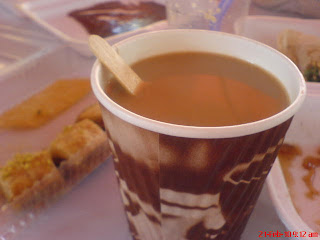 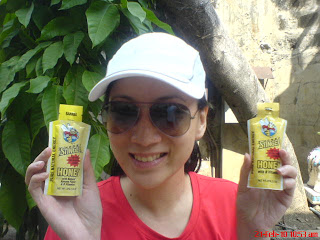 {How cool is this? They even got sponsors for their 3G Run!} 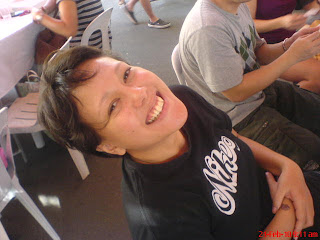 {Guest of Honor: Gabby Gregory}
{Watch out for this one, world!}

Famous Last Words
I used to be on the constant vigil to get my friends to take up running. For 2 whole years, I'd incessantly chat on about my weekend races. For 2 whole years, they'd dutifully listen and nod and ignore my emails on upcoming runs. This was a scene from last year...

Gabby on running: This girl (points to me) is crazy. She runs marathons for fun!!! For fun!!??Who runs for fun???

After a taste of their first race, guess who became the resident addict and "next run" forwarder? ;) Someone ate her words... I love it!!!

We'll miss you a lot, Gabs! Keep on running for your marathon dream (and more). You will surely get there faster than you think. And hopefully, we'll get to visit and cheer on you as you cross that finish line! ;)

This Lent, I Am Giving Up Tuna (Century Tuna Superbods Run 2010)

The race results for the 11,000 packed, Century Tuna Superbods Run is now out! Check your run results here.

How official is official?
I started my run at 5:33 a.m. (my watch). I ended at 7:48 a.m. Correct me if I'm wrong, but isn't that just 2:15 hours? Then how come my official result is 2:42? That's 30 freakin' minutes! Way too big. Granted that I got there a bit late (the 21K gun time was 5:20). Then I heard that they started the runs earlier than the printed time. That's fine, timing chip technology will record the race time accurately anyway, right? But 30 minutes??? Did the chip timer start as soon as the gun went off? Or maybe it automatically defaults to the gun time as soon as you step on the mat (serves all you gimikero late comers right. The joke's on me then. hehe)? No, right? So... why???

I'm so bummed. That was a really good run for me. It would've been nice to see it immortalized in PDF form. 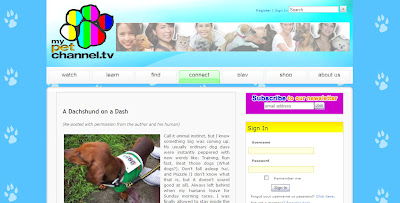 {Marathoner Imp was featured on MyPetChannel.TV}
.
I came home from a relaxed weekend in Tali with a message in my inbox telling me that my dog, Imp, and his misadventures in running would be featured in an online TV channel. Coolness! With work and full marathons running in my mind, I haven't been out with my four-legged running buddies for a while. I do miss running with those brats. I think this is a good time to start again.
.
Read the featured article here.
4 comments:

I can't feel my knees.

Was it the rounds I ran in Ultra last night?

Or was it the Mexican bean soup I had for dinner?

Ultra Running
Last night, Ultra was a runner's study hall packed with people cramming for the upcoming Condura Race this Sunday (Yep, guilty as charged). I ran with my friend, Allen, who would be running her first 10K. I spotted other familiar faces as well: Coach Rio and his team (Go Nike Clinic coaches!); crazy marathoner Iah, who was training with The Bald Runner team; and marathon buddy Dave, who would be running the half marathon.

I ran for 40 minutes, and did a little speedwork for 10 minutes. Admittedly, I kind of took it easy after last month's Cebu Marathon. This 2nd full mary was an idea I toyed with, but didn't really think I'd actually sign up for. But was I that out of shape that my body is now complaining after being on standby mode for a while? Does the lack of long runs really have much bearing, even after a recent 42K? My mind says no, but my knees say otherwise. Hmm... who do I believe? Stubborn head or dumb, numb knees?

Jalapeno Craving
After the training session in Ultra, we met up with other friends to have a "light" dinner at the cozy Mexican place, Jalapeno, in Ortigas Home Depot. (Ooh, you know what else is in Ortigas Home Depot? Second Wind Running Store. I finally dropped off my race bib to post on their racing wall. Check out The Wall. It's so cool!) I was craving for Jalapeno's gooey Baked Jalapeno Cheese Nachos and super yummy Vegetarian Burritos (which doesn't seem vegetarian at all!). My mouth is watering already. I ordered the Mexican Bean Soup as appetizer first. It was good, but now that my knees are hurting, and I wonder if the beans (from the soup and burritos) did me any good at all. I actually don't have gout though...

So, what's with the sudden pain in my knees? Was it too much running (40 minutes is hardly much compared to the 5++ hours on Sunday), too much Mexican beans, or {gasp!} purely psychological because of the looming race on the Skyway? (My first Skyway Run last year was disastrous. Ugh!) 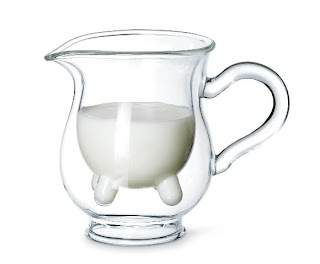 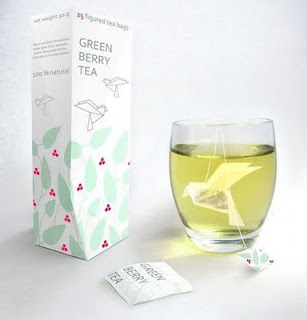 (Ooh, and I still want this for my coffee.)