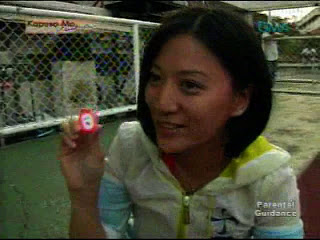 {Kapuso for a Day}
Wednesday:
Local TV Network, GMA's Kapuso Mo, Jessica Soho magazine show approached me to talk about my experience as a Nike+ user (Note: They were featuring microchip technology in everyday life).
.
Thursday:
Instead of being the usual behind-the-scene average Jane in photoshoots, I became janine+ (three guesses as to where my user name originated from), the Nike+ junkie.
.
I met up with Jaq, the show's researcher, around 5 to shoot the running scene in Rizal Stadium. The crew was already there when we arrived, so we proceeded to shoot. After a quick costume change, I collected my guts, sucked in my gut, and channeled all the acting abilities I could possibly muster from within. It was quite easy, seeing that I only had a few.
.
A typical Nike+ running experience was staged. I inserted the sensor (the chip factor) in the shoe, chose the training program and playlist (of course!), and just ran, ran, ran. Naturally, a janine+ storyline wouldn't be complete without a blooper. I was so engrossed with the running and the music, that I didn't hear them shout "cut". I ran around the whole lap in record time, and was panting heavily (no warm ups) for the interview when I got back. No cuts this time.
.
We were supposed to shoot the "upload" scene in K2, which would have been nice since we might be moving offices soon. What better way to pay tribute to the 8-year old blue and yellow space I call second home, than to be immortalized on national TV (not that we haven't been already). But since my house was closer to Rizal, we decided to shoot the rest of the scene in my place instead. Unfortunately, my renovation project is a far cry from being done. Too bad.
.
Friday:
Carbo-loading buffet dinner at Italianni's with friends (Running Fatboy, Perper Oven, Burp and Jinides included)..

Saturday / TV Premiere:
I found out what my good angle was. Blink, and you'll miss it. Haha.

So, to sum up this experience... 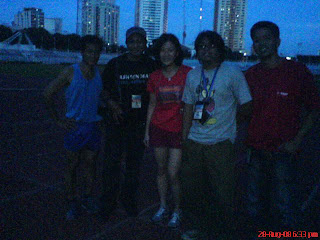 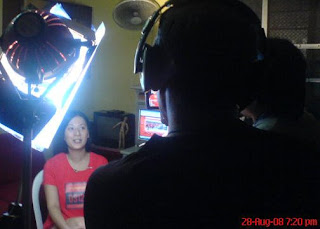 {About Pace: Behind the Scenes} 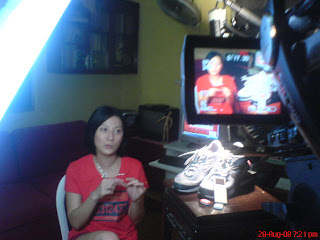 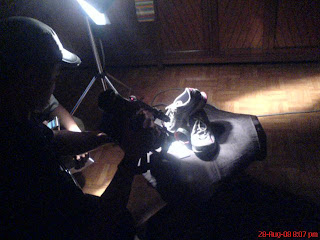 {Nike+ Paraphernalia, The Stars of the Show} 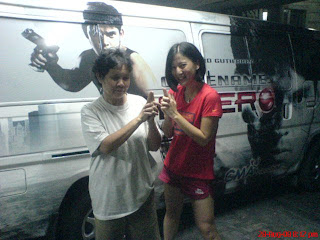 (Hamming it up with the GMA van, of all things.} {After 10 million sneaker changes, my Nike+ Mini Me is ready to run.}
.
I spent the day working while DVD marathoning The X-Files series. 2 projects, 3 book chapters (watch out for it soon!) and 6 episodes later, the lure of the internet was just too enticing.

Dawdled in 3 sites: Super poked around my Facebook; my Nike+ account; and Nikelab, which featured interviews of the designers and their rationales for the Olympic-line shoes. Cool. Since I was logged on to my Facebook account, I decided that my Nike+ Mini Me application needed a wardrobe update as well. I'm not sure if I was (A) really bored (B) really obsessed (C) really fickle (D) really enjoying playing dress-up or (E) all of the above, but it took multiple wardrobe changes before I finally decided on an outfit. After which I find out that a Human Race shirt was also available. You can probably guess what I did next. (Obsessed...)

Yep, today was pretty uneventful. My biggest accomplishment was that I made a cold nai-cha with gulaman (milk tea of Chowking fame). My highlight? The Tagalog version of Fergie's Clumsy (Lampa) that went something like this, Ako'y natisod, natapilok... Di maingat sa pagmamahal. Ako'y nadulas, umikot... Ako'y napatid, natapilok... It was probably the word natapilok used in a song. Kinda made me laugh.

Last week, I kept picking the grape skittles and red gummy candies (my favorite flavor and coloring respectively) from a jar of assorted sweets. It was all random. No cheating! ...uhm, much. It's a happy feeling, considering how crappy I felt since an injury prevented me from joining last week's race. Ordinary stuff, but then again, it was as if the stars were finally aligned in my favor.

Tomorrow is another day for more mundane happiness.
Time for a run.
3 comments:

What time of day are you?

{Living the moment in my own 'lil world? That is so true.}

Your time of day has a split personality -- sometimes it's sweat-streaked and loud, and you're on the dance floor, getting your third wind, and shouting lyrics like you'll never run out of energy. You are the time of night that carves itself into your memory forever, because you'll never forget how much you love these people and this moment and this song. It's not always about unforgettable parties, though. Sometimes your late night (err? early morning) burst of energy happens when you're home alone. Those are the times when you say, "I flat out refuse to go to sleep until I finish reading this book, or typing this page, or reorganizing my entire closet." In either case, you are the time of night when it feels sort of forbidden to be awake, but you love accomplishing something special long after everyone else went to bed. And hey -- you can always catch up on sleep tomorrow, right?

Out of sheer curiosity, and seeing how torn I was with some of the choice answers, I took the quiz again. Whaddya know, I got the same exact result. 2:11 am. Additional favorite numbers for my next attempt at Lotto maybe?

It's true though, as soon as I'm past the "sleep" phase, I can last for hours and hours afterwards. Once, I even managed to play through a whole day of beach football on pure adrenalin (during my younger years, of course. haha).

Although lately, I do have a weird habit of waking up around this hour with ideas brimming in my head. I've since then learned to embrace these so-called bouts of insomnia, and now keep a notebook and pen by my bedside, if and when inspiration strikes. That, and a bunch of DVDs to consume.

What time of day are you?

Take the quiz to find out:
http://http//www.the-n.com/quizzes/quiz_main.php?id=3321
No comments:

Miracle Runneth Over... Not.

I injured my foot at a photoshoot.

It would've been cool to say I hurt it by climbing up a tree to get the perfect paparazzi shot, or simply just a little klutzoid enough to trip over the camera lights... But nooo, I had to injure my foot goofing around a pseudo photoshoot (for behind-the-scene shots) making like Darna in all her flying glory. Stupid, stupid, stupidly stupid.

(The photo came out really nice though. And in just one take too! By default, since I landed hard on both heels on the first try. Nice.)

That was a Monday.

Saturday night, and it still looks like a miracle won't be happening any time soon.

There goes the Miracle Run. To all those running in Men's Health 10K marathon tomorrow, Good Luck and Kudos! for all the money you'll be raising for charity.

During my home-gym rat days, a treadmill was a staple piece in the house. How often it was used remained to be seen. Eventually, it evolved to become a towel rack/shoe cabinet/dog bed. An obtrusive, unsightly one at that. (Thank God, it's gone now.)

I stumbled on these ingenious indoor climbing walls on the net. Talk about sosyal climbing. A great solution for the would-be white elephants of the fitness kind. Now, the only problem would be getting someone to actually step on these gorgeous art pieces.

Functional and fabulous... I want! 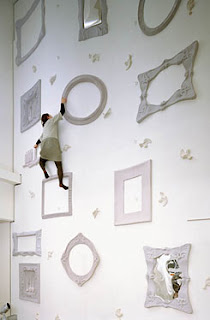 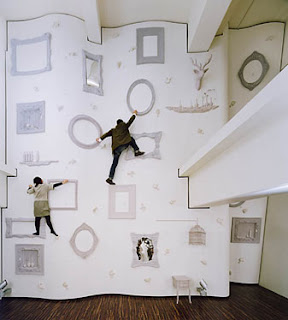 Down the hole and into Wonderland.
Scaling new heights at a climbing gym in Tokyo. 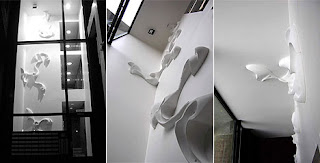 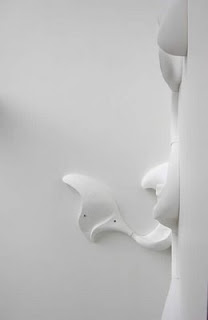 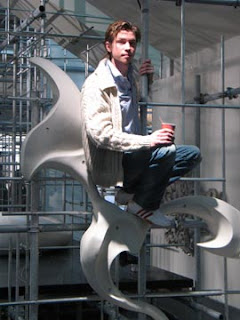 Designer Joris Laarman puts the FUN in function and the IN in ordinary. Bravo.