October's Takbo! Breast Friends Run marks my anniversary in running. This year, however, I missed the run, but will still be supporting the cause in a different way.

No, your eyes aren't playing tricks on you, nor are you turning color blind. It's SpongeBob- in PINK! 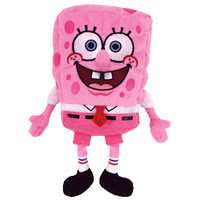 Nickelodeon teamed up with I CanServe Foundation and came up with oh-so-cute limited edition Pink Pants paraphernalia like T-shirts, pillows, and baller ID's. It's available in SM Department Stores until the end of the month only. 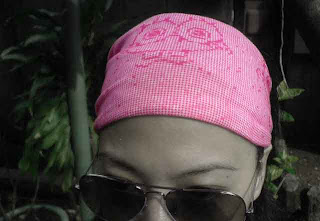 {I got a Spongebob Pink Pants Multiway Scarf.}
{I can use it as a wristband too, since Watch+Run+Sweat=Chafe. Ugh!}


For men averse to pink, you can still help the cause in your own macho way. Don't forget to run the New Balance Power Run... Raising Hope on November 29, 2009 in Bonifacio Global City, Taguig. 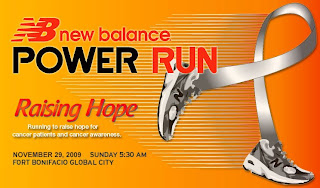 P.S. Can't get enough of pink? Or if you just want to help the cause, check out Beautynomics' Blog.

Orange you glad you can carbo-load?

Just sharing my kitchen project this coming weekend. Here's hoping I get to recreate this yummy (well, at least it looks that way) pasta dish. But maybe without the caviar... =) If anyone else decides to have a go at this, do let me know how yours came out. Happy carbo-loading to all the marathoners this Saturday/Sunday! 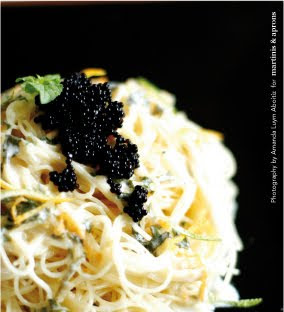 Angel Hair Pasta with Dalandan and Orange Sauce
by Marielle Santos (from Martinis & Aprons: A Lifestyle Cookbook for Those Who Like to Entertain)

In a saucepan, combine cream, milk, dalandan, and orange zest. Bring to a boil, and then lower heat and simmer until thickened, stirring frequently. Add cognac and mint leaves. Season with salt and pepper.

Toss with angel hair pasta and freshly grated Parmigiano-Reggiano. You may drizzle with truffle oil before serving, or top with black caviar.

Oranges
Eat enough oranges and you may experience less muscle soreness after hard workouts such as downhill running. Why? Oranges supply over 100 percent of the DV for the antioxidant vitamin C, and a recent study from the University of North Carolina Greensboro showed that taking vitamin C supplements for two weeks prior to challenging arm exercises helped alleviate muscle soreness. This fruit's antioxidant powers also come from the compound herperidin found in the thin orange-colored layer of the fruit's skin (the zest). Herperidin has been shown to help lower cholesterol levels and high blood pressure as well.

Add to your diet: Add orange sections to fruit and green salads, or use the orange juice and pulp for sauces to top chicken, pork, or fish. And to benefit from the antioxidant herperidin, use the orange zest in baking and cooking.

Whole-grain Pasta
Pasta has long been a runner's best friend because it contains easily digestible carbs that help you restock spent glycogen (energy) stores. Whole-grain versions are a must over refined pastas because they contain more fiber to fill you up, additional B vitamins that are crucial to energy metabolism, and disease-fighting compounds such as lignans. And even better, pastas such as Barilla Plus offer whole-grain goodness along with heart-healthy omega-3 fats from ground flaxseed and added protein from a special formula of ground lentils, multigrains, and egg whites to help with muscle repair and recovery.

Add to your diet: Pasta makes a complete one-pot meal--perfect for busy runners--when tossed with veggies, lean meat, seafood, or tofu. Or combine pasta with a light sauce, a bit of your favorite cheese, and turn it into a satisfying casserole. 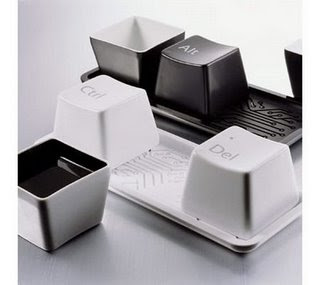 
I reach for my tea and slowly drink in the absurdity of the 21K race form (Paid!) I hold in my hand. After weeks of zero running, the reality of panting and gasping through a half marathon only gives me a feeling of dread. So, what's a delinquent runner to do? Press Alt Z to Undo!

Yes, this little chicken downgraded a 21K race kit to a 10K. I'm all set to simply enjoy the Adidas KOTR experience, instead of just trying to NOT die while running down Buendia. ;)
8 comments: